While reading the May 1904 issues of the Marissa Messenger, we came across an article about the laying of the corner stone of the Blanton Hotel which would have occurred on May 7th. We had nothing on this hotel in our files. The first picture is the cornerstone laying in 1904. It was directly north of the Hotz Building, more recently Marissa Station Bed & Breakfast. A portion of a 1906 map of Marissa and Old Marissa, which hangs in the Historical Society Museum, shows exactly where this building was located on South Main St., however it is called the Illinois Hotel. Between it and Finger Furniture Store are a photo shop and a cobbler shop. The third picture shows Finger Furniture, the two small shops and the Hotel, then the Hotz building.
The last picture is of the Marissa Hotel which is said to have been located on South Main on the North end of the same same block. It would later become Finger Furniture and in 1958 it was the Corner Cafe. The building was later torn down. 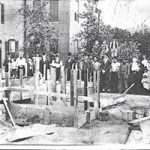 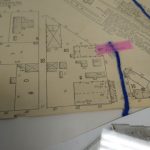 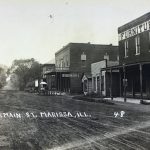 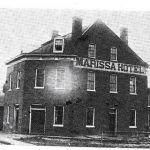